Thomas Cromwell Dies Horribly On This Day in 1540: 28 July Was Worst Ever 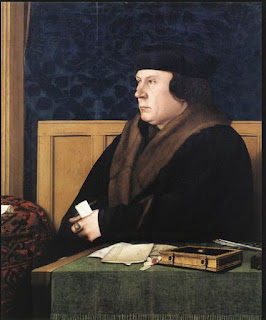 Nobody could talk him into a corner; verbally he was nimble as a barefoot kid in a nettle patch; always glancing down to avoid the spiky, but jumping more gracefully and to a better landing than anyone else in the Tudor court.
And did that make him well-liked?
This working-class guy who somehow, some way, despite his 'dese, dem, and dose' upbringing was the King's guy.
No. The rich kids at court did not like anything about him. Socially, he was pond scum - but Thomas Cromwell was whatever he needed to be in the moment; meaning he was whatever the King needed him to be.

Cromwell smiled out of both sides of his mouth when he worked the crowd of courtiers, making deals, doing a little behind-the-scenes manipulation to throw someone under the bus, he was great at it.
And? Henry VIII liked having a few friends around who were different, who didn't fit the mold of the rich kids and who had rich kids of their own, generation after generation, and all of whom served their king.

Cromwell and H8 had their ups and downs.

Example: Cromwell had to pretty much stand and take it whenever H8 rage-vented.
In view of other courtiers, H8 sometimes cuffed Cromwell around like an animal abuser would a dog - not enough to kill but enough to break a spirit and be utterly mortifying.
Those rich kids didn't have to take that shit from the King.

So, what led to Cromwell dropping like a bag of wet cement from the King's favor? How did he, of all people, end up on the scaffold, looking at the edge of that big shiny axe?

Here's how: Cromwell knew H8 through Queens Catherine of Aragon, Anne Boleyn, and Jane Seymour (who died so tragically right after birthing H8 the boy he'd been festing over.) After Jane's death, Henry who wouldn't sit easy till he had a spare to his infant heir.

So Cromwell had a think, then thought some more about who Henry should marry - and how he, Cromwell, could get credit for the King's forthcoming blissful, loved-up groom state.
So Cromwell served Henry up a royal bride, a smart-choice politically bride, a nice princess named Anne of Cleves from the Low Country (Norway/Germany) part of the world. 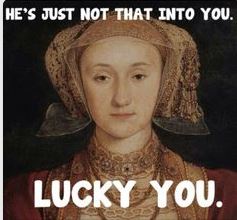 Henry married her via contract.
(Small plot point here; small, but important: Henry had never seen her, just a painting.)
When he finally did meet her F2F, the marriage was a done deal; they were legally hitched.
For better, for worse, in good times and in bad.

And did Henry like his new bride? Was he pleased with her?

He. Hated. Her. Hate-hate-hated her.

Cromwell took the heat and the fall for the King's hatred of Anne of Cleves (who ended up outliving the King, two more wives, and Henry's son, Edward VI.)
And the rich kids lined up to kick Cromwell in the face.
So much pent-up frustration from dealing with the King's low-born deal-maker, so much gloating over his fall from the top of the King's Friendship Pyramid; Cromwell was fucked.
And he knew it.

In the end, on July 28th, 1540, the rich kids had the last word. Some say the most Alpha Rich Kid got the headsman (yes. He was the axe-swinger.) so drunk the night before the execution that he was still drunk the next day.
Being drunk doesn't do good things for a headsman's aim.
There is also a story that Alpha Rich Kid and a couple of his satellites paid the headsman to botch the job.
Gruesome, man.

Even if those two stories aren't true, the very least they did was to choose to have him arrested on the trumped-up charge that would get him executed in the most public of places. They (literally) ripped his chains showing his high service to the King right off his neck, and perp walked him to the Tower of London.