And Every One was a Henry. Today's Henry: VII

Henry VII just *might* fit that criteria.
Not a thug by birth; no, Henry VII did have several pints of the royal blue stuff mixed in with the Welsh upstart ('thanks, Dad's genes!') and the ingeniously meticulous mind like a computer genetics of his mother.

Henry VII's mother, the formidable and unflappable Margaret Beaufort, was the daughter of John Beaufort, who was the son of John of Gaunt, and he was the fourth son of Edward III, who was an adequate achiever when it came to leaving behind male issue of his body.
Kings take that kind of thing extremely seriously.

Margaret Beaufort, Henry VII's mother, had King Edward III as her great-grandfather, and that was good enough for her to put every bit of her strength, grit and fortitude into backing her boy in his attempt to knock the York (white rose) off the throne.
Henry's father was Edmund Tudor of Welsh descent whose family stumbled into royalty when a relative, from the out-iest outskirts of belonging at the monarch's court, drunkenly ate shit on the dance floor and landed in the lap of the queen.
It was love at first sight, and then she went on, to the combined disbelief and outrage of the court, to marry him, AND have his children.
So, technically, blue blood although nobles winced when they said it.

Sure, the bloodline was right, but fourth son?
Welsh party boy for a grandfather?
Ambitious, gimlet-eyed mother?
Thanks, but no thanks. Members of the nobility decided they weren't motivated to risk treason charges by backing Henry Tudor, no matter how rotten the current king (Edward IV or Richard III.)

Henry Tudor, even as a child, posed enough of a 'born distressingly close to the throne' problem for the the then-king, Edward IV, that Margaret Beaufort
shipped her boy off to Brittany for safety's sake.
Brittany was then an independent duchy of France - and therefore, not bound to answer to the King of France.
That was part of Margaret Beaufort's game plan; Brittany couldn't be ordered by either the king of France nor the king of England to hand over her son.

Growing up in Brittany, Henry Tudor was taught all the same things any young nobleman was taught; dancing, music, hunting, riding - all the skills and niceties required in a king.
Yes.
A king.
Margaret Beaufort was going to take a stab at getting her son on the throne and was willing to die (or for him to die) trying.
They did the only thing they could do while Henry was in exile in Brittany: waited.
(Watched, and teased information out of courtiers favorable to their cause as well.)
On occasion, either Edward IV or his successor, Richard III, would send out the equivalent of a "come on home, Henry! It's great here! Never mind the manacles and dungeon, you're gonna LOVE the Tower of London!
And did I point out the great hill right next to it?" message.
Wisely, Henry VII ignored all such invitations.
When Edward IV died, his first-born son (and he did it right, had both heir and spare) was right on the cusp of puberty, with a younger brother still in the "snips and snails and puppy-dog tails" stage of boyhood.
Enter their father's brother, Richard.
(all together now, hiiiiiiisssssssss)
In no time at all the two Princes were in the Tower of London, never to be seen nor heard from again.
Their uncle, Richard ("Uncle Dick" with an emphasis on the second word) declared himself king, and la la la, he clambered right on up to the throne and made himself comfortable.

Henry Tudor, after one failed attempt to storm England and claim that throne for his very own, had a big think about how to storm England again, this time successfully.
He worked out the details: land in Wales (remember the drunken Tudor relative - a Welshman) with mercenaries from a couple of different countries of around 2000 and 500 grouchy Englishmen - a collection of 2500 scalawags.
They landed in Wales undetected.
As they marched towards Richard III (who was expecting their company) Henry had to keep breaking up fights between his mercenaries, and the fights tended to be along nationalistic lines.

Henry VII, it was rumored, held a meeting with his mother's second husband, Lord Stanley on the night of 21 August, 1485.
Nobody ever found the meeting's agenda notes, but it's a good bet the two cooked up a strategy.
The next day day, Henry Tudor charged Richard III's troops on 22 August, 1485 in the Battle of Bosworth.

Richard had more men on his side.
Henry's troops were amped up, buoyed even, by the lack of resistance they'd encountered on their way to the battleground, though - a hopeful sign that Richard III's subjects didn't love him as much as Richard III thought they did.
Numbers are pesky things, though, and Richard III's numbers were bigger.

The battle favored Richard III's troops - because there were just so many of them - until - HOLD EVERYTHING!!
DID YOU JUST SEE THAT? 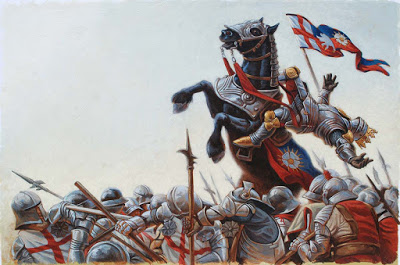 Son, you done earned yourself this here crown! Henry Tudor became Henry VII in the slice of a sword, and that was freaking EPIC.


The new king trotted off to town to claim his throne and marry the sister of the two little Princes missing from the Tower of London.
Oh, yes, he did.
Right after killing her uncle.
Granted, her uncle ("Uncle Dick") Richard III was no prize, but still!
In happier news, Henry VII *actually* loved his wife, Elizabeth of York and appears to have been devoted to her.
Henry VII and Elizabeth of York got hitched on 18 January, 1486.
Nine months later, their son Prince Arthur was born.
Henry VII had united the two warring 'houses' of England with his marriage, then went for the 'Best In Show' ribbon by having a son exactly nine months later.
And that, folks, is how it's done.

They went on to have four more children; Princess Margaret, Prince Harry (not that one, the Henry VIII one) Princess Mary and a baby girl who died shortly after her birth.

Henry VII and Prince Arthur spent a lot of time together.
Teaching a boy to be a successful king meant lessons all day, every day.
(Royal-bashers, you try that as a career. It's less 'living on the back of the common peoples' and more 'I don't care if it's 11pm and you've been at this since 5am, you're going to have to make the numbers come out right!' than one might think.)

Henry VII's style of stocking the court differed from previous monarchs; he had little use for nobility (who could get ideas about their own family's claim to the throne) so he not only didn't include them, he actively taxed the absolute shit out of them to keep them too busy with their stomach ulcers from worry to think about a power-grab.
Instead, Henry VII surrounded himself with landed (land-owning) gentry and some men of the church.
A step below nobility, sure, but way less competitive.
Henry VII was a ticking and footing* kind of guy whose stock in trade was risk management.

He backdated when his reign began to 21 August, 1485.
Richard III's backers, therefore, had committed treason.
See what he did there?
While only the peskiest and most obnoxious of Richard III's backers were actually punished by imprisonment, the rest of them were taxed. Taxed. Taxed. By the way, tax bill's due. Get the picture?
And p.s. - your taxes are late. Again. Double the fine. haha!

He was also less cold-hearted than one might think; upon learning of a lion-baiting, where two mastiffs tear into a chained lion from the royal menagerie, his reaction was it was not right to injure the King of Beasts.
He had the mastiffs hung as punishment, so, yeah, forget about that 'less cold-hearted than one might think' bit.
That was pretty cold.

Henry VII had learned from all that waiting in Brittany that the country was divided on who ought to rule it; there was always the chance someone might convince his neighbors to rise up in protest - so he tightened up law enforcement (no infighting, kids) and he also ska-rewed merchants on customs duties.
This guy had his eye on the ball, his own team, the other team, the referees, the scorekeeper, the groundskeeper, and the old lady manning the till at the refreshment stand, so to speak.
Aware he had no spare son, he was uber-neurotic about what Prince Harry could and could not do.

No rough sports, someone to taste his food, slept a hair's breadth away from dear old dad every night, guards, body guards, more guards - and lessons.
All of this was no doubt quite a shock to the prince, who had until then figured he'd join the church, and so had spent his childhood romping with Mum, Gran, and sisters with very little serious business, ever.


When Henry VII died of tuberculosis at Richmond Palace in 1509, he left a surplus in the country's coffers.
That alone is worth admiration; Henry VII might have been a bit (!) of a tightwad, but you can't argue with the results.
His reign left a legacy that guaranteed his son, Henry VIII, would have Daddy issues for life - because how can you compete with a father who was so baller, he took the crown off a king on the field of battle?

Henry VII was baller.
He thugged his way onto the throne (sorta) and threw out the rule book that said 'treat nobility with kid gloves.'
That's how it's done.


**'ticking' off the entries, and making sure they add up at the 'foot' of the page. FUN!