This morning at 6:49 am in Piedmont, California, things got a little quakey.

Earthquakes are a fact of life in many parts of the world, and England is no exception.

Tudor England experienced them as well:

“A grett (great) wondernus of herth and specially in Darkyng and dyvers plasys (places) pots, pans and dyssys donst and mett (dishes danced) and (hung) meat felle doune about howse and with mony odur thyngs.”
(Translation of a report of an earthquake in Croydon.)

Earthquakes haven’t changed that much in the damage they inflict on homes.
To say that “pots, pans and dishes danced” sounds a whimsical turn of phrase to twenty-first century ears.
In Tudor England in the sixteenth century, there was less experience with earthquakes and when one occurred, it was an event. To describe pots, pans and dishes as having ‘donst’ (danced) was fairly pragmatic and easily-understood; after all, there’s only one way to picture dishes dancing – jittering about on the cupboard or shelves upon which they were kept.

The ‘foul air’ released by earthquakes was blamed for plague – and that theory continues amongst some even in the twenty-first century.


In Tudor times, when the odd ‘Act of God’ had no known science to objectify the event as an anomaly, or a series of anomalies, blaming the air released by an earthquake prior to a plague of the sweating sickness made sense of the horror.

There are lots of fault lines under England and Scotland, and as the planet continues to evolve and plate tectonic shifts occur, earthquakes are as much a reality there as they are here in northern California.
Chimneys still tumble.
Dishes still dance. 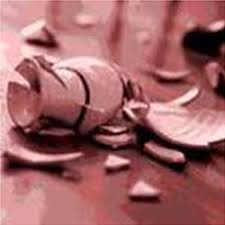 The ground either shakes or rolls, depending on the type of earthquake (“shaker” or “roller” – when the earth either trembles or rolls in waves, visible waves if the quake is strong enough.)
People still pause at the thought that humans most assuredly do not control the earth upon which they walk.

Tudor times or present day, earthquakes have the ability to scare just about everyone who’s experienced feeling the earth move.
It’s the human in us; then, our scientific brain kicks in and tells us to expect the adrenalin rush that follows in short order.
After that, like the residents of Tudor England, it’s time to sweep up the broken crockery, separate the useable bricks from the broken ones that made up the toppled chimney, and thank God that it wasn’t worse.